Esther Giles Nampitjinpa was born in Yumari, north of the Docker River in Western Australia. Following the death of her younger brother, her family moved out of the desert to the newly established government settlement of Papunya.  Esther, along with her sister, Tjawina Porter Nampitjinpa was a traditional basket weaver and wood carver before coming to prominence for her painting skills.

Esther’s paintings represent her ancestral homelands—sand dunes or ‘tali’ and rock escarpments known as ‘puli’ (semi-circle icons), as well as waterholes and food sources are depicted in her work.  Symbols in her paintings are regularly used in body painting for traditional ceremonies—concentric circles representing waterholes and lines connecting to symbols that refer to ancestral pathways or ‘songlines’ established during ‘Tjukurrpa’ or time of creation. Each of the sites became a significant location for the purpose of ceremony and initiation.

Esther Giles Nampitjinpa exhibited in numerous solo and group exhibitions both in Australia and internationally gaining her worldwide recognition. Her works are represented in private and public collections across Australia and in Europe and the USA. 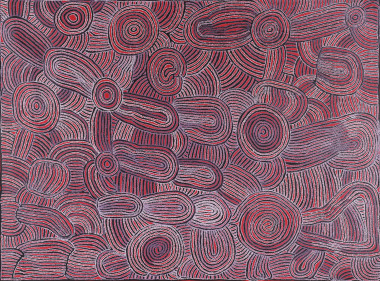 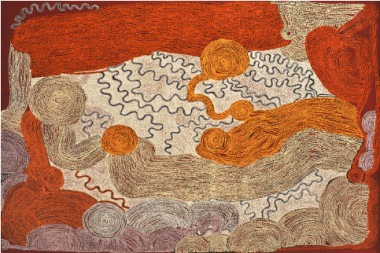