Born in 1977, EnglandLives and works in Melbourne

In 2015 Vincent Fantauzzo devoted much of his energy to painting and working en plein air. Several journeys into Central Australia fired his enthusiasm for landscape painting and for the first time he met the last of the nomads. In an ambitious project he painted large-scale portraits of Wentja Napaltjarri and Tommy Watson, Linda Syddick, Gloria Petyarre and Kudditji Kngwarreye as a series of triptychs—a monochromatic portrait of the artist focusing on the face and hands, a painting of their landscape displaying a sensitive and meticulous rendering of scenic detail and the third canvas would be painted by the sitter themselves in his or her own style.

This exhibition will be on display at Nanda\Hobbs Contemporary from 7 – 15 April, 2016. 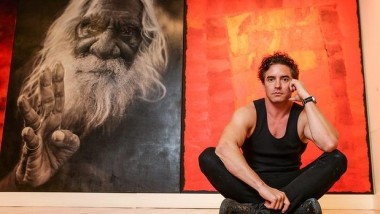 Kngwarreye is one of five Indigenous artists painted by Fantauzzo, a four-time Archibald People's Choice winner whose portraits of celebrities, including wife Asher Keddie and Oscar winner Charlize Theron, have struck a chord with the public.

His portraits of the desert artists are displayed as part of five triptychs in Last Contact, Fantauzzo's first Australian exhibition in five years at Nanda/Hobbs Contemporary gallery in Sydney's CBD.