Born 1961Lives and works in Melbourne

Robert Doble’s exhibition of new paintings appropriately titled ‘Fusion’ provides a narrative of our molecular world. The first impact is one of vibrancy as colours of unlikely combinations (yellow, mauve and purple or pink and yellow) ensnare the eye whilst the mind attempts to catch up with the image. Whereas much abstract art invites more of an intellectual response than a sensual one, in these paintings, the use of colour and the web-like structures seemingly caught at a moment of transformation initiate a dialogue with the viewer about a living, sensate, organic world always in a state of change yet simultaneously creating momentary states of order.

It is therefore not surprising to learn that Doble’s paintings are inspired by his interest in medical plates that show, under the microscope, the intricate patterns and dance-like movements of cellular matter. These paintings do not give a static surface; it is as if we are viewing the blue-prints of human activity not only of our own bodies but also the natural environments in which we exist. This becomes the subject matter of a conversation between the art and the viewer.

Robert Doble was born in the UK and has resided in Australia since 1990. He arrived here after completing qualifications at three art schools in London. He speaks of his childhood as one that consisted of painting and drawing from an early age, that is, when he was not cycling through the rural country-side of Dartmoor.

Alongside an interest in biology and botany that included collecting old, mostly German books, that exhibited startling photos of medical plates, Robert peered curiously into the inner visual fabric of the body as much as he observed that outer nature itself exhibited the same formations of colour and movement. As an adult he secured a deep-sea diving license that opened up further experience of colour that exuded from underwater coral molecular structures. He refers to these colours as ‘hyper pop’ and in his paintings he seeks to recreate this visual experience.

When Doble speaks of the techniques he employs when creating these extraordinary body/mind/nature ‘scapes’ one is drawn into the enactment of what he refers to as ‘Fusion’. He speaks of mixing glossy enamels and depositing the paint as if using a syringe on medical plates.

Like Francis Bacon, Anselm Kiefer and Picasso before him, his narrative is told by the power of colour and perhaps although these paintings may be abstract in fact, in essence, they are telling the visual story of our inner and outer composition. Paintings of this kind are able to demonstrate in the technique itself that chaos and organization can culminate in meaningful organic fusion.

The practice of dropping paint onto the surface is one that is hard-earned as one must estimate how paint will fall, how much to drop in terms of the image required, and always, simultaneously, prepared to see where error might take one. Paint as Doble points out has ‘its own sense’. Yet in the process of making the paintings in this exhibition he was seeing those biology slides that under the microscope showed the secret life of blood and plant tissue. Doble stresses that before dropping the paint globules onto the surface, the latter must be wet and must remain so throughout the process, in order for the painting to present as one layer: this is the way in which the event of fusion occurs.

The titles of the paintings: Chromosome (1&2) (black, white & red);  Phosphorus (yellow, mauve and dark purple); Fusion (grey, brown, red, black, yellow, pink and white); Lithium (orange, blue and teal); Helium (pale pink, yellow and white); Titanium (orange, cream, green, purple, black) reference a world of science and chemical activity of different kinds; the combination of colours on the other hand provide a blaze of seemingly un-experienced colour; yet when we truly look into nature itself these combinations are seen to abound in multiplicities. Each painting is unique and has a specific energy. Fusion, for example, seems to explode in activity, having more colours than any of the others; it strikes me as being an enactment of the event of fusion before composition finds a moment of organization. Similarly, Titanium has a rather ominous aspect to it with its dark explosive colours and its formation of facial expressions. The other paintings mainly depict patterns of life as if caught in one moment of transformation before assuming yet another pattern and Helium like the chemical itself is a formation of floating entities, ethereal and at peace within an abiding structure.

Doble, when asked what he might want most from these paintings, replied that he wished for people to find joy in the work and for the work to open up new dialogues. These extraordinary paintings do indeed celebrate the joy in life in all its forms and in all its transformations. A new dialogue begins. 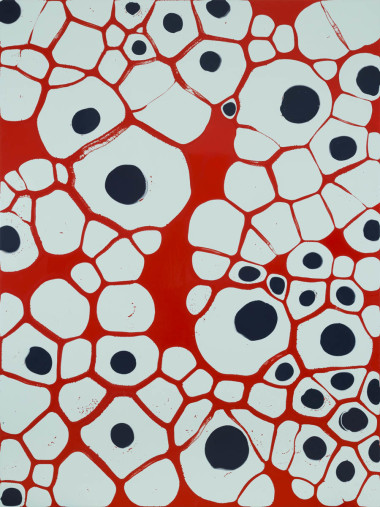 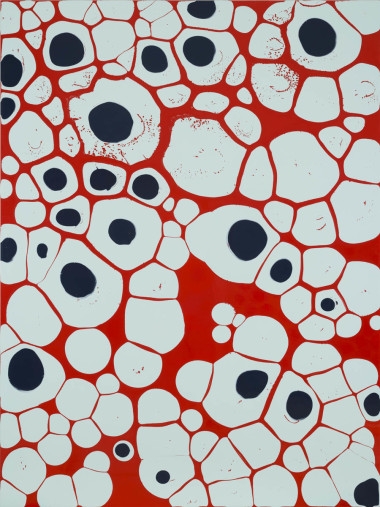 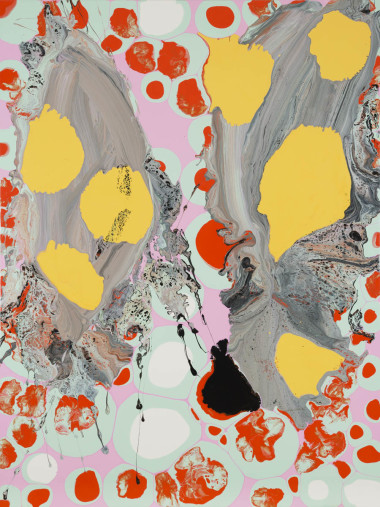 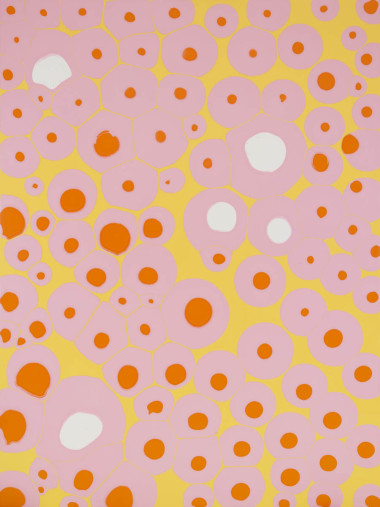 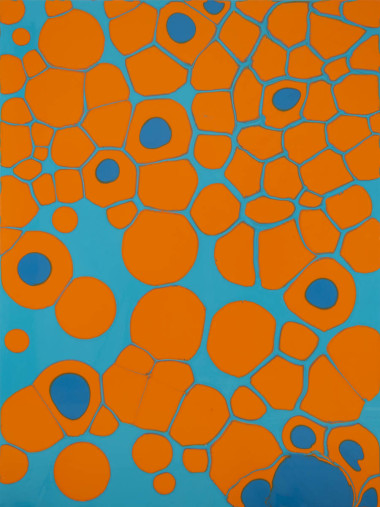 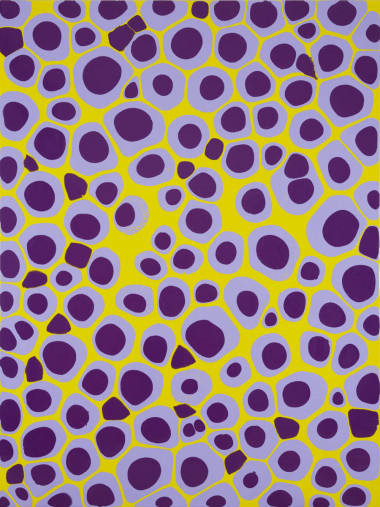 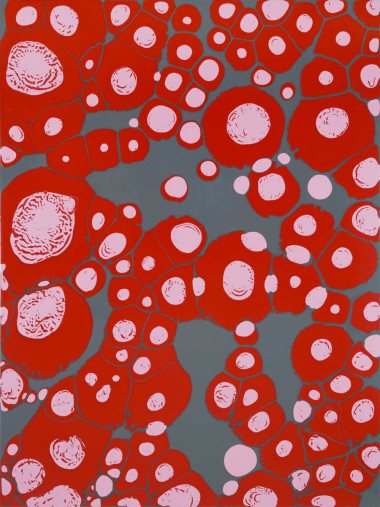 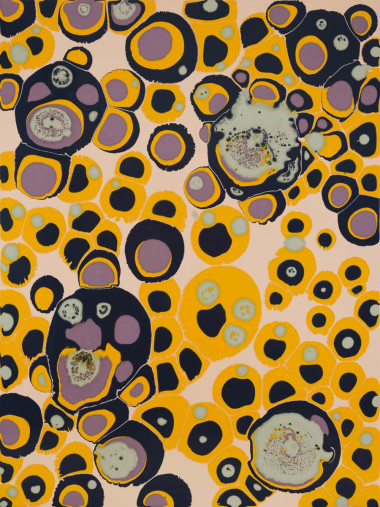 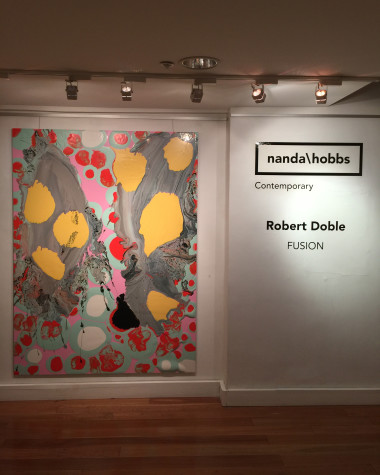 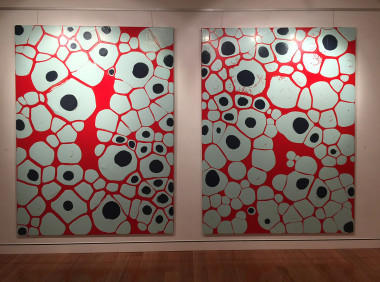 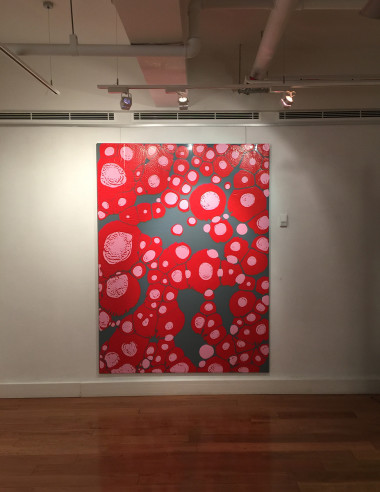 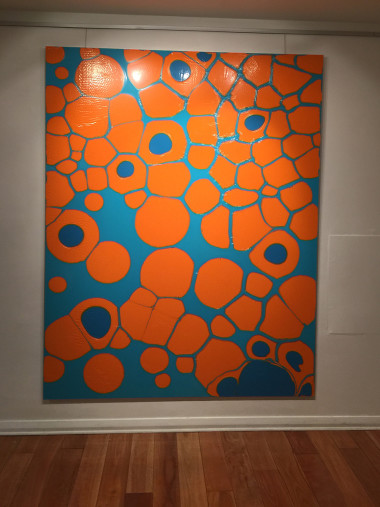 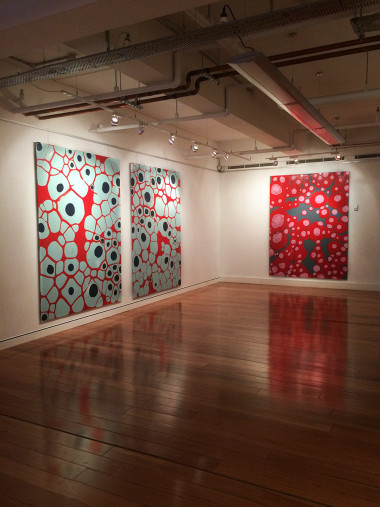 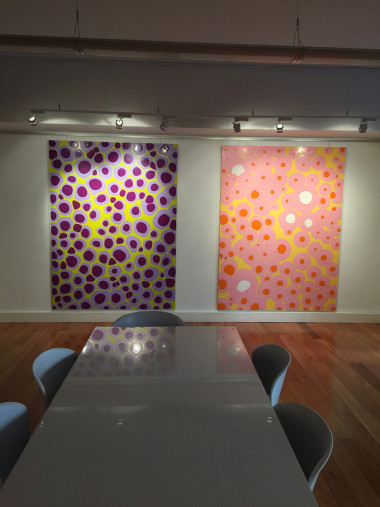 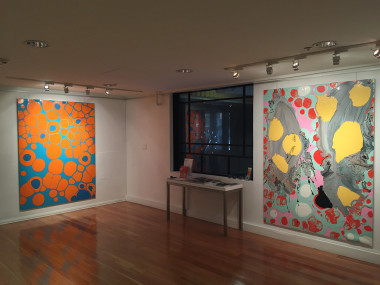 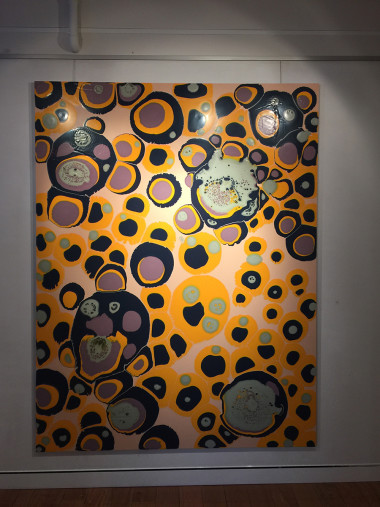 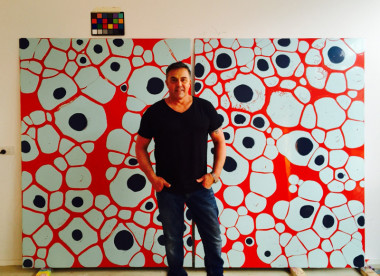 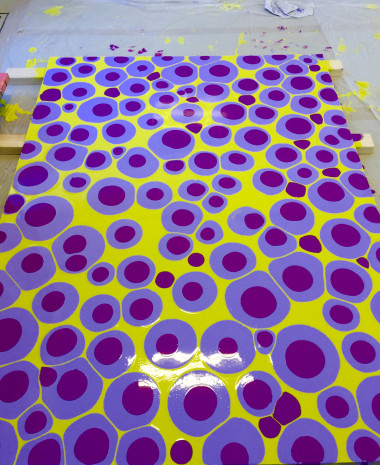 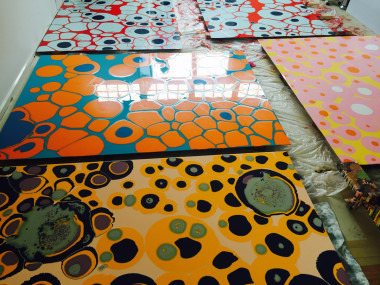