Jonathan Dalton may be able to paint a bowl of fruit with near-photographic precision, but he doesn’t wish to be known as a photorealist. It’s often forgotten that the original Photorealists, such as Richard Estes and Chuck Close, emerged in the United States at the same time as Hard-Edged Abstraction, Minimalism, and Colorfield painting. The movement was seen as a response to the dominance of abstract art at the end of the 1960s but it could just as easily be characterised as another form of abstraction.

Like the Abstract painters the Photorealists were quick to disavow meaning and symbolism, presenting their work as a slice of life captured with the mechanical objectivity of the camera. When Gerhard Richter was painting pictures based on family photos that held great emotional significance for him he pretended they were simply images chosen at random from magazines and newspapers. His main concern was to put his work on an equal plane with abstract art.

The world has moved on from those days when artists could still believe they were part of some ground-breaking school or movement. Artists today are individualists who might come together for a group exhibition, but rarely under the banner of a manifesto.

Dalton, for all his technical expertise, is a painter of ideas who is not worried that an audience might find meanings and messages in his work. A student of philosophy before he took up painting, he delights in visual puzzles that careless viewers might not even notice. It takes a moment’s study to realise there is a red glass bauble from a Christmas tree included in a bowl of bright red tomatoes, or a yellow billiard ball slipped into a bowl of lemons. The natural is pitted against the artificial, setting up a host of questions. We expect a billiard ball or a Christmas ornament to be perfectly round and smooth, but if a piece of fruit partakes of the same geometrical perfection it feels  disturbing – as if we are witnessing at the results of genetic modification.

It’s the same sensation one gets from looking at face that has been made completely symmetrical – as in a series of doctored photo-portraits created by German artist, Katharina Fritsch, in which each figure resembles an android rather than a human being. Things that are natural or organic, whether they be faces or fruit, seem to require imperfection to be perceived as genuinely beautiful.

In The Onions' Porcelain Skin, Dalton sets the papery skin of a group of onions against the neo-classical precision of a Wedgwood bowl. Josiah Wedgwood (1730-95) is known as the man who pioneered the mass reproduction of pottery, along with a host of modern sales techniques. Nevertheless, when we look at a Wedgwood bowl today, with its elegant frieze of classical figures, it seems like a complex work of art in comparison with the plain, utilitarian nature of so many factory-produced items sold in department stores and supermarkets.

Wedgwood’s bowls were made to cater to the taste of the late 18th century when ancient Greece and Rome were the models of aesthetic perfection. Today we are more likely to admire the delicacy and skill with which Dalton has painted the onions rather than the frozen ideal of beauty embodied in the bowl. To complicate matters further he has included three tiny sets of figures that turn this still life into kind of mock-landscape. The fact that these figures represent marriage, birth and a proposal (albeit to a horse!), adds an allegorical element – but what story is being told? The dancing figures imply life, fertility, celebration, but the onions alert us that tears will be shed.

There is more implicit allegory in the three paintings that show a camera, a typewriter and a reel-to-reel tape player. One thinks of the three wise monkeys: ‘See no evil, speak no evil, hear no evil.’ There’s another angle in the tiny black-and-white chess pieces, and the words “black” and “white” that have been added to the tape player. Politically speaking there is a growing tendency nowadays to see the world in terms of black and white, but this runs counter to the monkeys’ advice. Dalton believes life is more usefully viewed in shades of grey, as symbolised by the perfectly balanced background tone of these paintings which partakes of equal parts black and white.

In W.B.Yeats and his Byzantine Onions, Yeats’s famous poem, Sailing to Byzantium – a meditation on the soul and immortality – is screwed up in a ball at the bottom of a bowl full of onions. It’s an image that speaks of the vanity of both earthly ambitions and grandiose spiritual aspirations. Dalton is revealing himself as a rationalist in his imagery and his observational style of painting. He can appreciate the appeal of Yeats’s lines or the shimmer of light on an onion’s skin, but he puts his trust in material things, not in poetic ideals.

Dalton says that when he was studying philosophy the big topics were virtue, ethics, morality and the problem of evil, but as an artist he is more overtly concerned with aesthetics: with the creation of images that have an instinctive appeal to the viewer. He makes images that approximate the problematic objectivity of a photograph but can’t accept than any image is truly without meaning for the maker or the viewer. His pictures are distinguished by the need to keep playing with different registers of experience, binary opposites, hidden affinities. His sense of “immoral symmetry” refers to the unbalanced ratios of these still lifes, in which one quail egg takes on a disproportionate significance in a bowl of cherries, or vice versa. Viewed in all their complexity, Dalton’s paintings read like a extended meditation on Jean-Luc Godard’s famous aphorism: “This is not a just image, but just an image.” 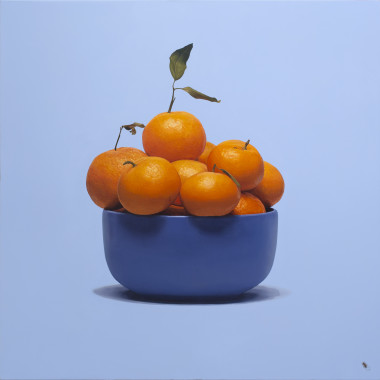 A Honeybee investigates some mandarins 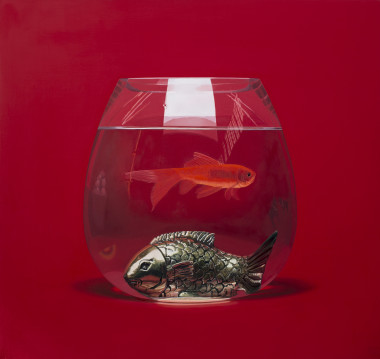 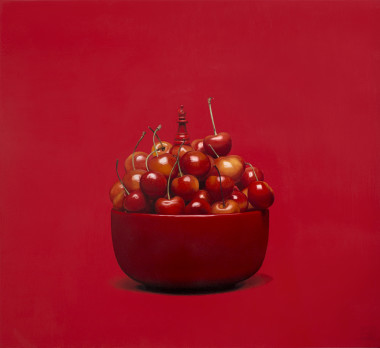 A portrait of cardinal richelieu 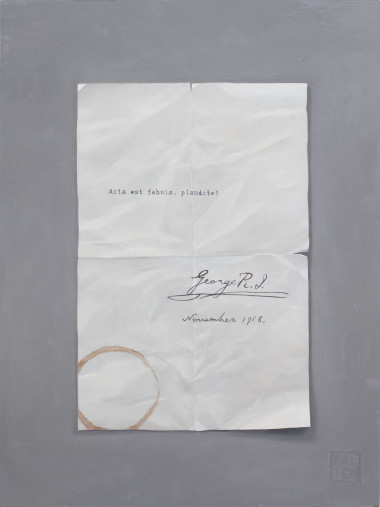 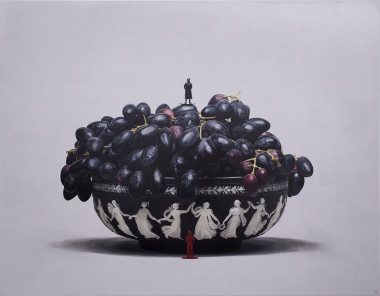 Across the wine dark sea 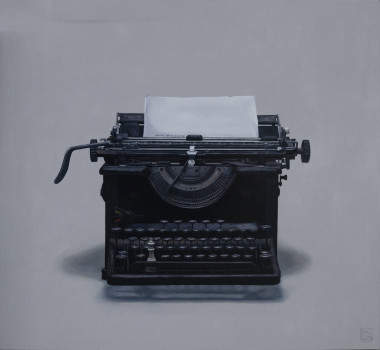 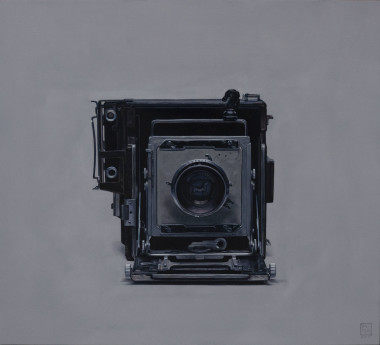 On the nature of imagery 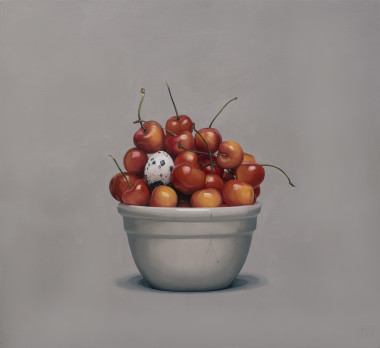 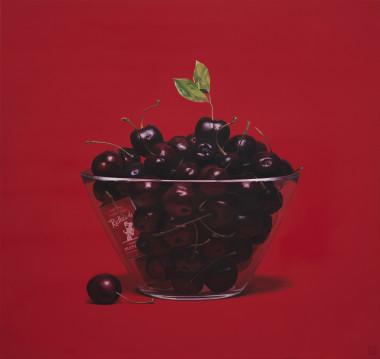 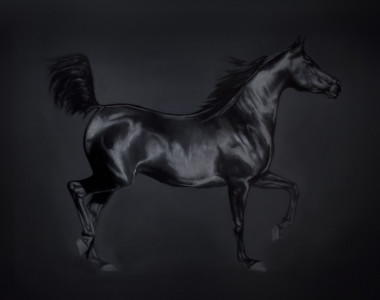 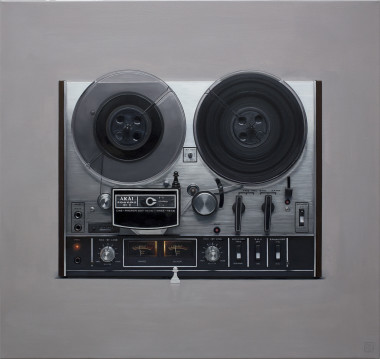 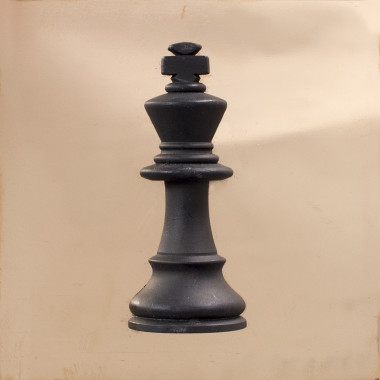 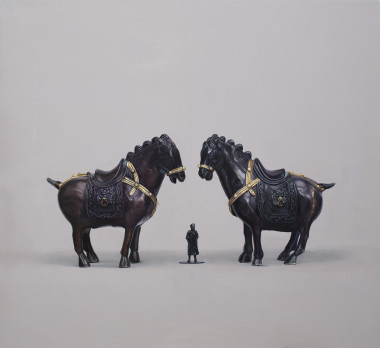 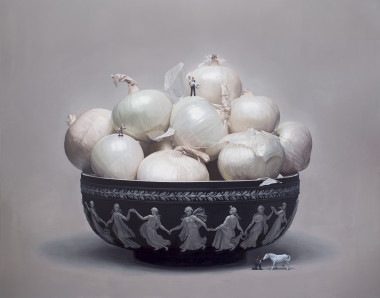 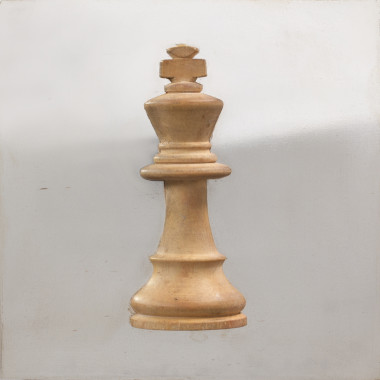 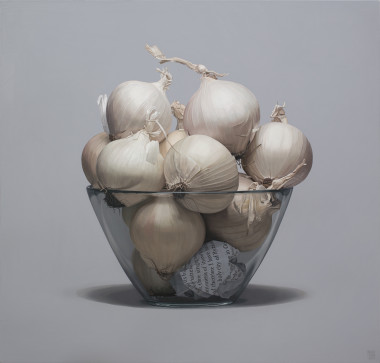 WB yeats and his byzantine onions 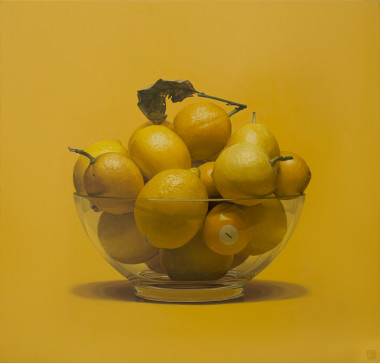 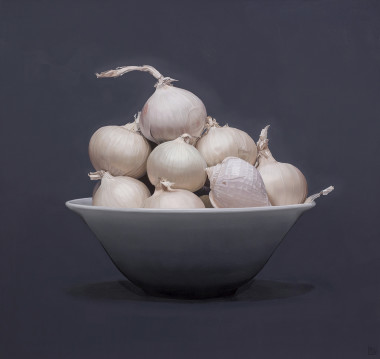 Without Earth and Sea 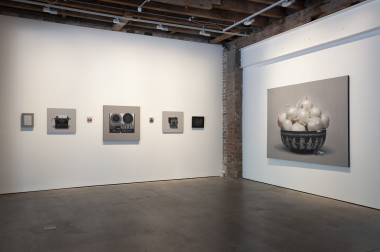 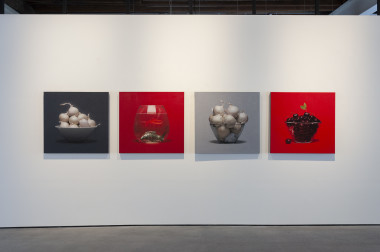 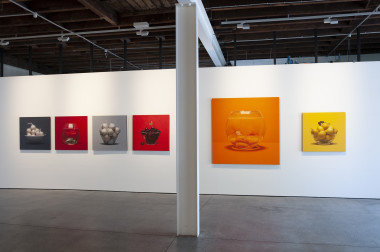 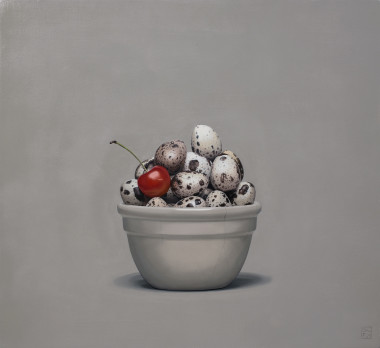